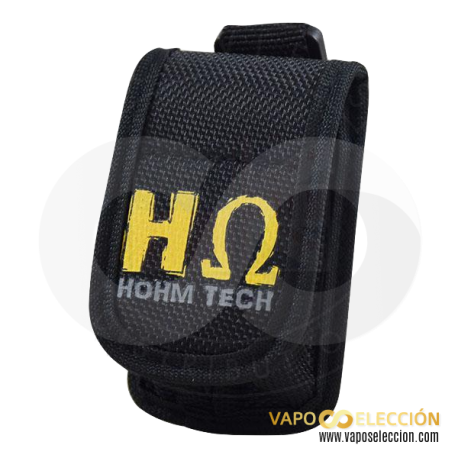 The Hohm Tech safety battery holder is designed to fit 18650,20700,21700batteries, with two brackets that have a belt clip and loop for safe transport and impact padding inlay for added safety.

8 other products in the same category:

The Hyperion DNA100C Lost Vape vaping mod is a state-of-the-art mod that runs on an 18650, 20700 or 21700 battery. In addition to its great autonomy, the Lost Vape mod is capable of providing a colossal power of 100 Watts and offering TC, play and increase modes. These multiple configurations are possible thanks to the presence of the DNA 100C chipset. Without a doubt, it is one of the most successful chipsets on the market.

To the Centaurus line is added the new Q200. Always accompanied by an impeccable design with aluminum and real carbon fiber in a perfect size for daily vaping. This Centaurus has a maximum power of 200w and a guaranteed response of 0.001s, it is also compatible with 18650 batteries (not included).

Covers and new designs for your Mech Pro from Geekvape, give your mechanic a personal touch!

qp design Prey Limited Edition Flashlight Mech has a very attractive design with an easy grip, with engravings that make a very pleasant overall effect of the product. This mechanical mod needs a 21700 battery (Not Included) The hybrid connection gives off conductivity! A small but ingenious extra and that makes this edition special is the head with adapter 510 composed of an included LED, which allows us to turn our device into a flashlight, also includes two adapters of 25 mm and 28 mm to integrate our atomizers.

The Dovpo Bushido Box Mod, is a specialized portable squonk mod for 22mm BF RDAs, powered by an 18650 battery. We spent a lot of time and energy on the optimal design of the internal structure to make this mod the smallest among all the squonk mech mods produced, and very close to the high-end squonk mods handmade in terms of size.

A monster of conductivity made in Russia, an ergonomic and unique design makes it one of the most famous mech mod on the market.

Lost Vape's Thelema Quest mod offers a very positive user experience thanks to its superb performance and sleek, ergonomic design. It has a maximum output power of up to 200W thanks to the use of two removable 18650 batteries and offers up to 5 vaping modes with numerous protections.